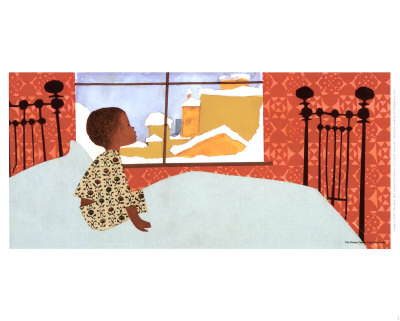 Thank you Ezra Jack Keats for giving America Peter.  He wasn’t a little Rascal, or a Brady, or a Menace; just a boy.  A boy who liked to explore; generations before America met Dora.  I don’t know why there weren’t any children’s books with characters of color —but there weren’t.  Yes, African Americans have had loads of writers in America since Phyllis Wheatley stepped into colonial times.  However, Mr. Keats’ book  A Snowy Day marks America’s introduction to a new image.  A positive image of a black child, who lives in an apartment, not a big house.  I love this book because I love snow, it snows often in NYC; and I love rolling around in it before it gets all sloshy.  I have always lived in an apartment building, a lifestyle not often written about in children’s books.  This was not the suburbs, this was a city kid.  I often played on the rooftop of our building with my brother after a snow storm.  Oh gosh, my first printed kid like me, except he wasn’t a girl.  Since I mostly played with boys as a kid, Peter fit right into my world. 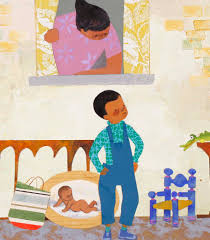 Peter’s parents loved and cared for him…just like my mom for me.  His mom reminded me of mine.  I agreed with Peter on loads of issues, especially being the eldest child.  Peter’s Chair  another favorite of mine, describes a child dealing with the birth of a new sibling.  Peter’s dad paints his chair pink, to prepare for a baby sister. Now that feeling has no color; an eldest child everywhere can relate to the situation.  I am the eldest of four, so enough said.  I was totally on Peter’s side.

Peter grew up in a time, when children could go outside and play unattended.  My neighborhood in the Bronx used to be like this.  There was no fear of assaults from adults only other kids.  Dealing with and outwitting bullies was key in getting from point A  my building to point B the park.  In Goggles  Peter has to deal with older children who want to get a hold of his new find.  His setting was like my demographic, laundromats, small stores for convenience, and tall buildings.

In Whistle for Willie, I am reminded of the time I wanted to crack my knuckles.  I couldn’t but wouldn’t quit trying until I could.  Literary themes of persistence, friendship, personal relationships, and minor miracles are understood by all children.  Peter wasn’t the only character who embodied this.  He was the only one that reflected my image.  This certified for me that my feelings were normal.

People say, “Image is everything”; this phrase has a dual meaning.  It is more than what you look like and how you present yourself.  It is the importance of the images available to the people.  It is now that children in America can see and explosion of positive well rounded reflections of themselves in the media.  Lizzza on Youtube is one; and she is an interesting character.  iiSuperwomanii is another.  As a teen, I saw very little positive images of myself and my community.  The success of Dora the Explorer has led to more and more positive representations of communities formerly left out of print and television.  Images in print, that reflect the various American communities have been slow to show.

I salute you Mr. Ezra Jack Keats, for awakening an America for all in print, now television.  A Snowy Day is now animated on Amazon. The movie gives Peters first story a holiday feel for every American.  Don’t miss it.

Visit  The Ezra Jack Keats Foundation to find out more.